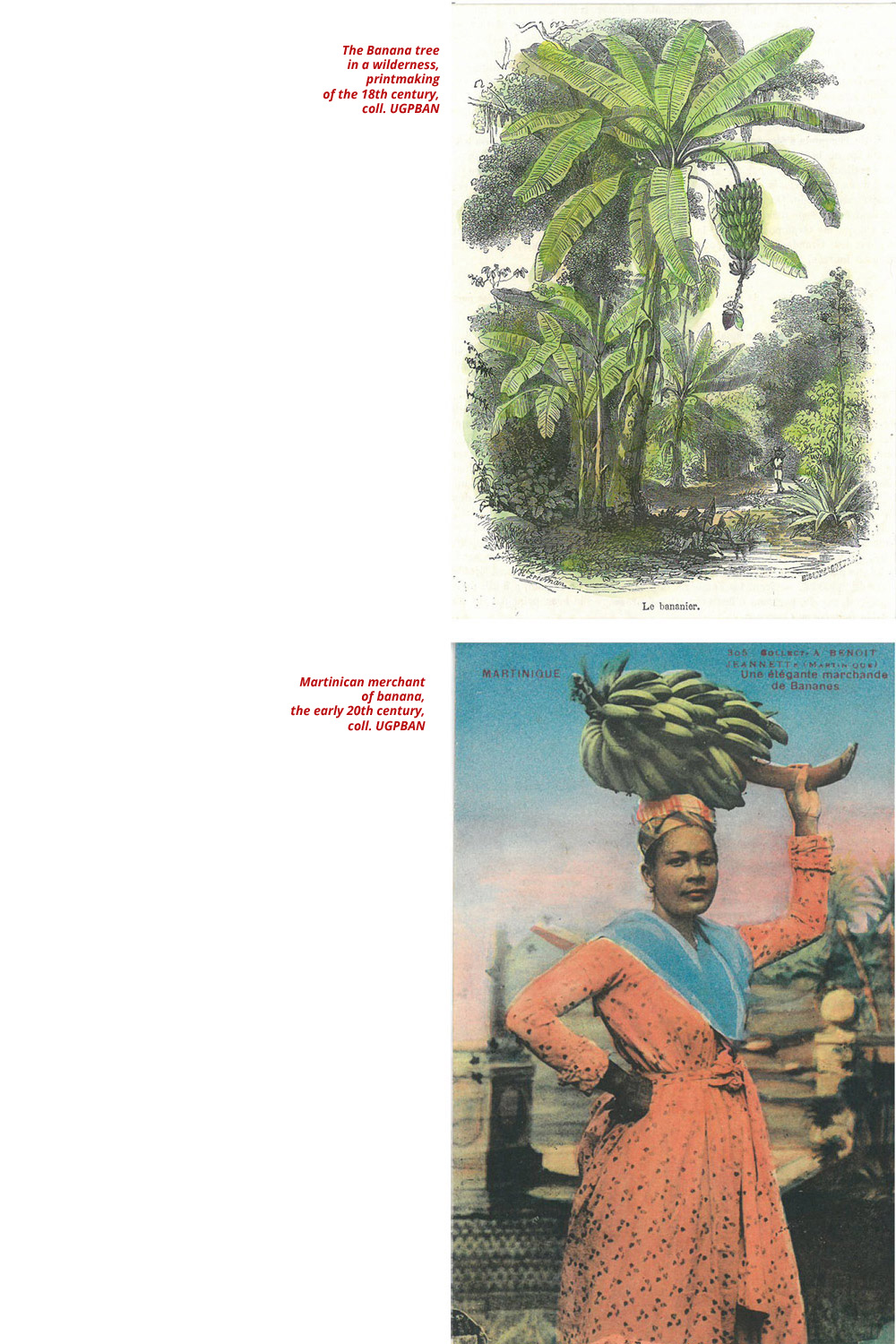 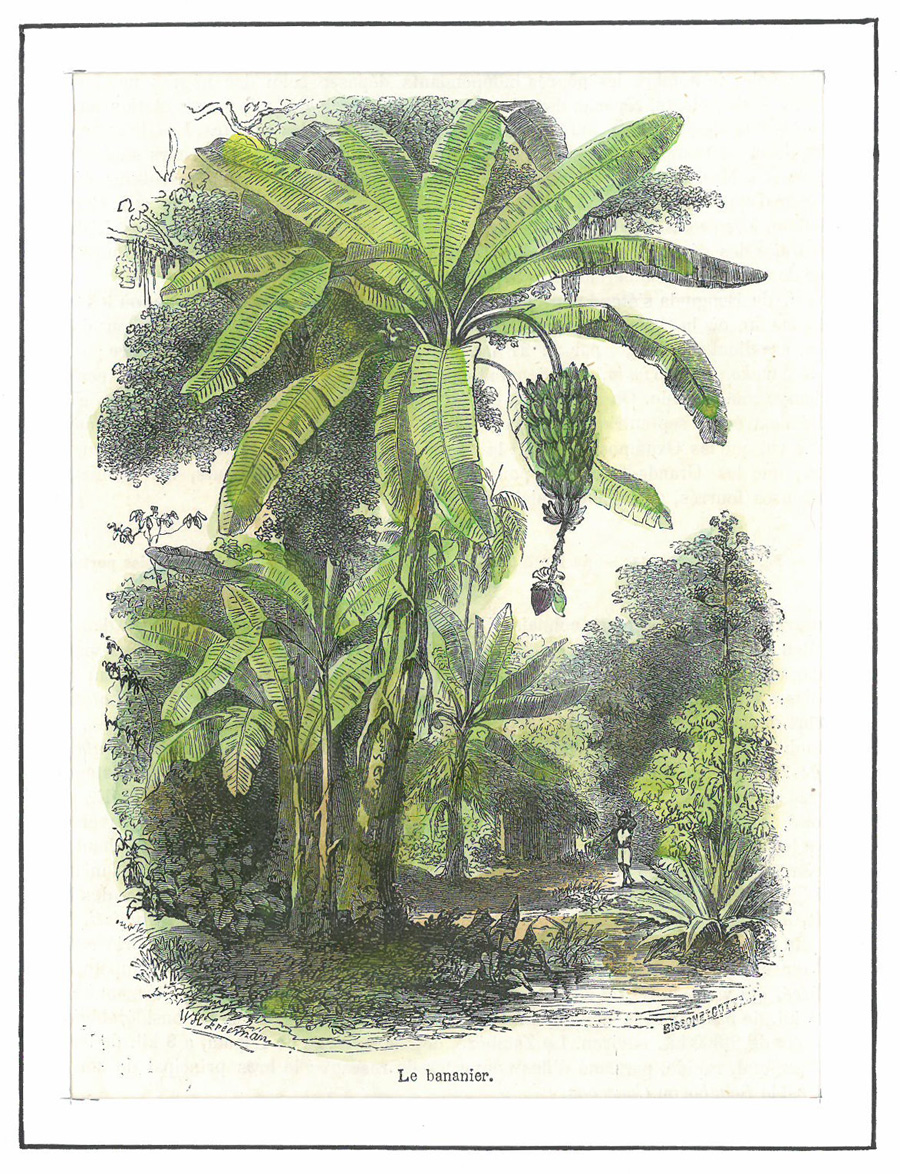 The History of the
Guadeloupe and Martinique Banana

By a French royal order of September 7th 1736, twenty five plantain banana trees were to be planted per slave. Plantain banana thus became one of the main staple foods of the slave community in the French West Indies. Unlike sugar cane, this fruit was not regarded as connected to slavery or to trade with the French mainland.

Dessert banana was brought to the West Indies during the second half of the 19th century, as the new fruit gained popularity in the United States of America and Europe. In 1892, a publicist from Martinique, Gaston de Pompignan, tried unsuccessfully to grow the “Gros Michel” variety for exportation to France.

1928: Production in the West Indies starts to develop The banana tree was still grown as a food crop production, and to help grow other crops. Used in coffee and cocoa plantations to provide shade, it provided farmers with extra income. Consequently, Guadeloupe and Martinique supplied only 7% of the French market. In 1928, a cyclone devastated the coffee and cacao plantations of Guadeloupe, and the decision was taken to shift the focus to bananas, which had a short growth cycle. 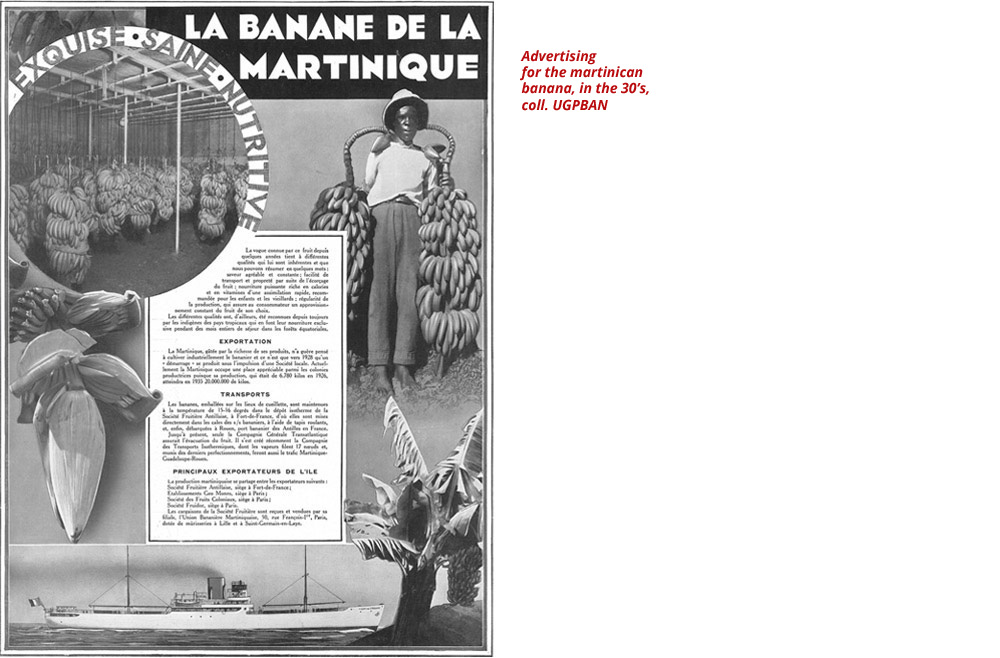 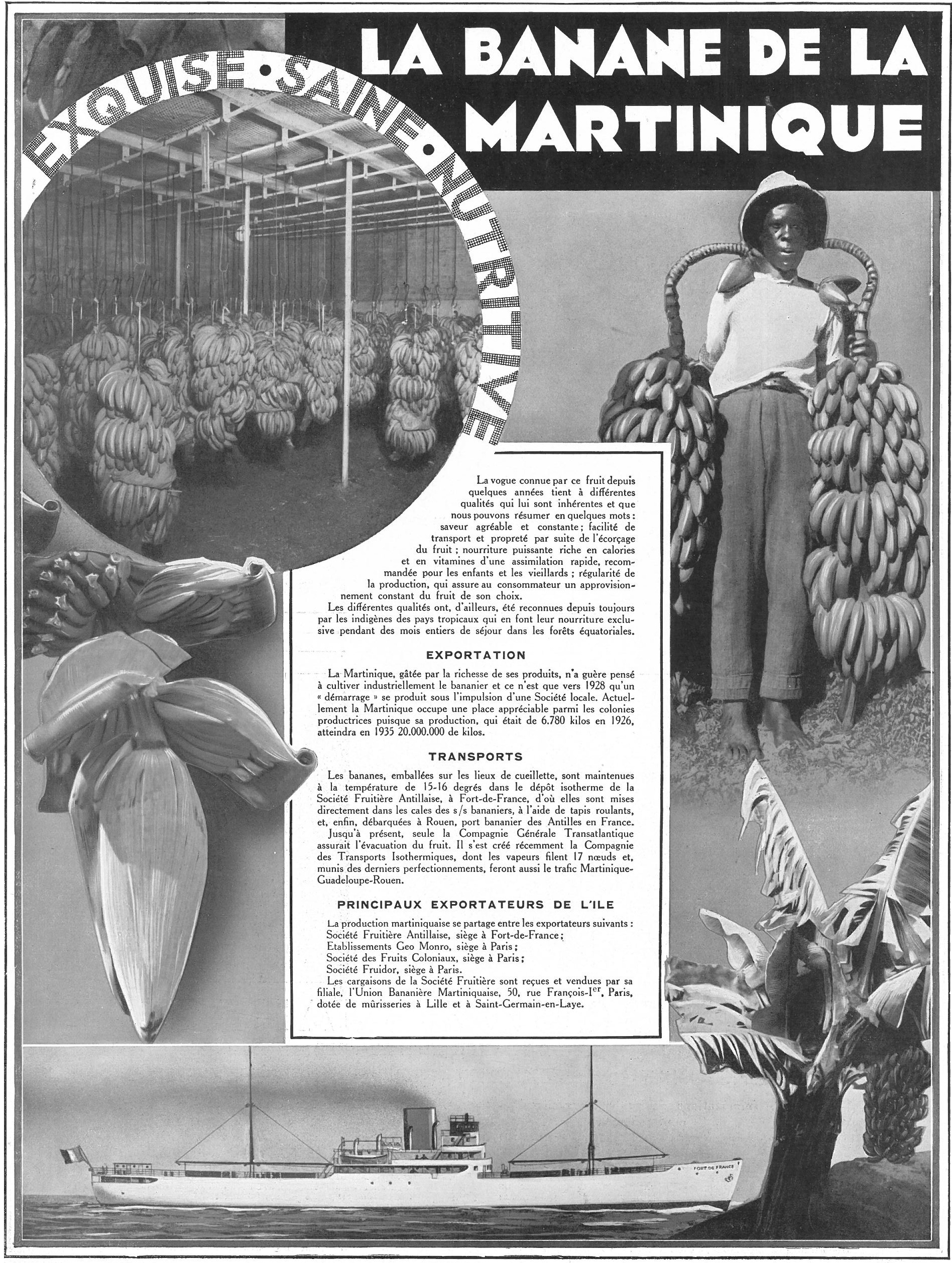 1933: Regular freight
for the transport of bananas

Thus far, the absence of regular sea freight to the mainland slowed down the exportation of the West Indian banana. The French line Compagnie générale transatlantique was reluctant to invest in this emerging commerce. However, in 1933, determined to develop the economy of its colonies, the State asked the French line to charter a weekly fleet dedicated to transporting bananas.

1962: The West Indian banana
takes off in a protected
national market During the Three Golden Decades, banana production was a fast growing sector. It expanded from 77,000 tons in 1946 to 260,000 in 1962. This progress was mainly due to a preferential access to the French mainland market resulting from General de Gaulle’s decision to stake out French procurement, with two thirds of the French market being supplied by the West Indies, and one third by the former French colonies. 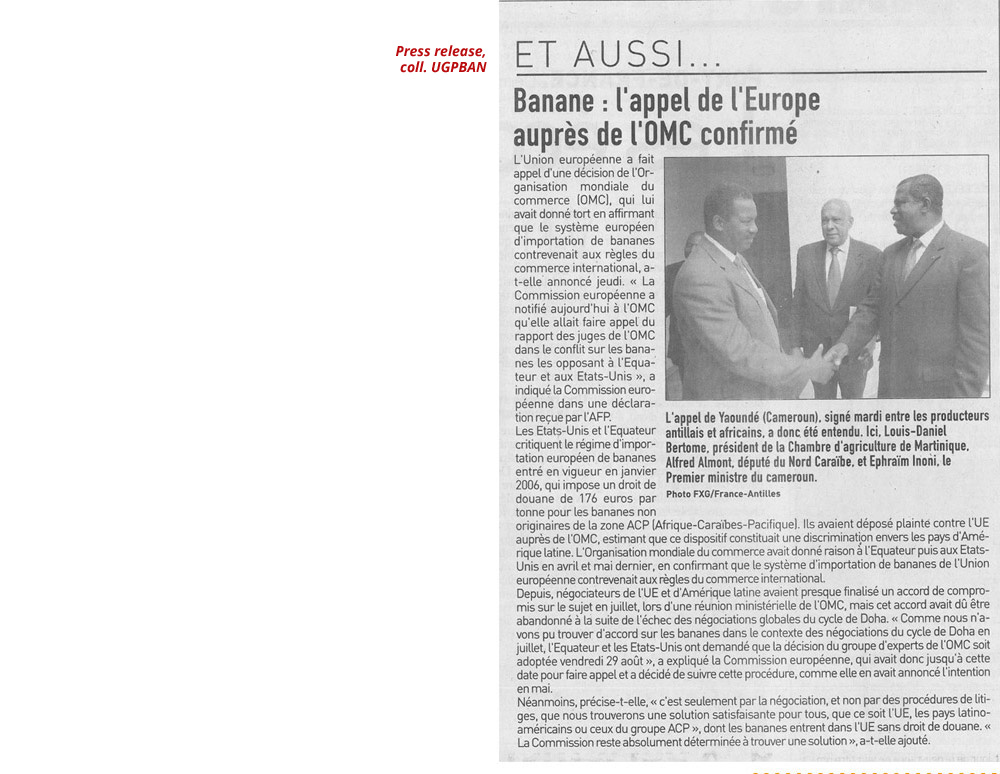 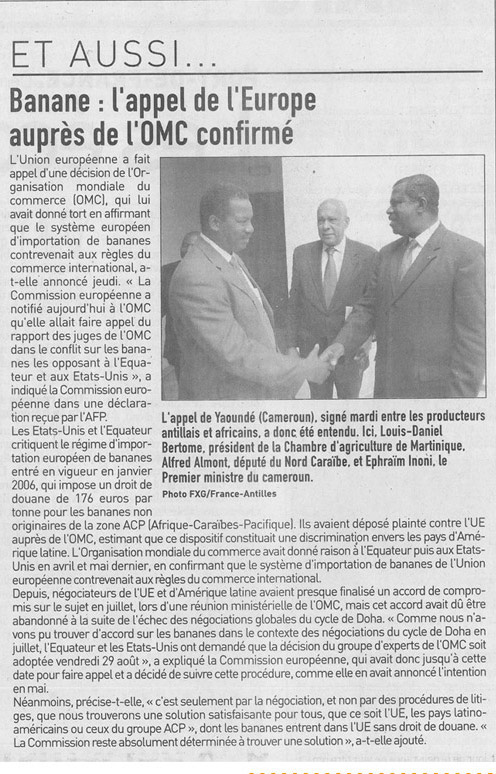 1993: The French banana
moves into the new European
common market

On January 1st 1993, the European common market took over from domestic national markets. The French banana no longer benefitted from the national preference granted for several decades. In order to fight back against multinational companies offering bananas from South America at much lower prices, the European Union implemented measures to help European farmers remain competitive.

2003:  UGPBAN is created to unify the banana sector

The West Indies sector was close to bankruptcy in the early 2000s. Besides facing foreign competition in the European market, it was fragmented into too many producer groups, leading to an increase of production costs. UGPBAN (Union des groupements de producteurs de banane) was thus created to rescue the sector by enabling several advantages: cost-sharing, use of a common marketing tool, and more effective communication on banana issues to national and European bodies through a single, unified voice. 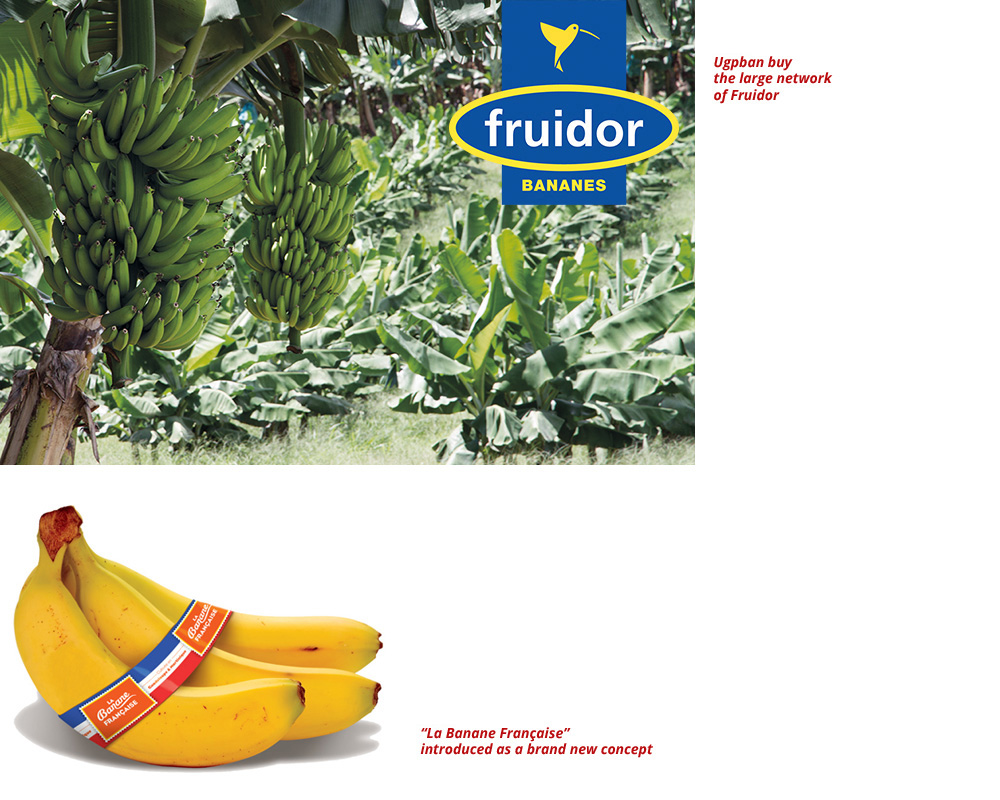 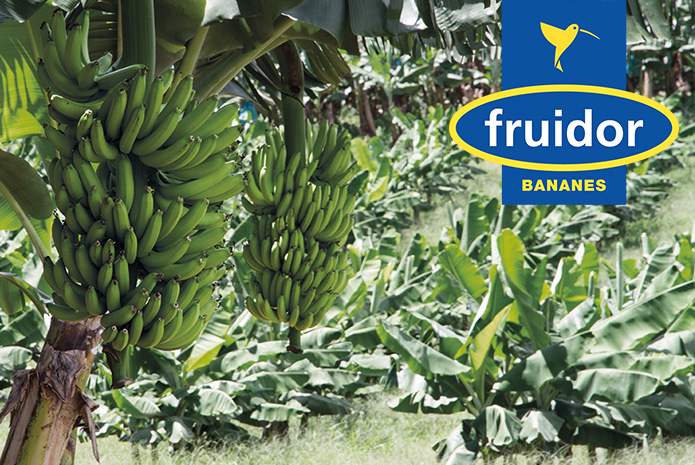 UGPBAN was pursuing the move launched in 2003 to optimize competitiveness and enhance the quality of the West Indian banana. The aim was to differentiate this product from the South American banana, which was produced at low cost, and in highly questionable conditions. In order to control its downstream process, the Union decided to buy the large network of Fruidor ripening facilities from its owner, Pomona. From there onward, the West Indies sector had its own banana ripening structure.

Unquestionably, nothing looks more like a banana than another banana. Consequently, UGPBAN decided to further differentiate the banana from Guadeloupe and Martinique, and to make it more recognizable by enhancing consumers’ awareness about its origin and sustainable mode of production. La Banane française, marketed with the French tricolor ribbon and sold in batches of 3, 4, 5 or 6 fingers, was introduced as a brand new concept in the banana trade. 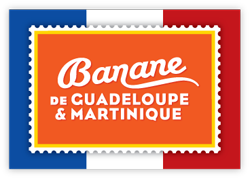 The historical Archives
of the Banana Sector

UGPBAN gives particular care and attention to preserving its historic heritage, namely print, audiovisual and photographic archives. This is a valuable resource for the sector and is also part of collective memory. The mission Information et Patrimoine is in charge of enriching, preserving, enhancing and communicating this heritage.

UGPBAN will make its archival collections readily available to individuals and academic researchers.
The documents in its collection constitute a precious source of information for:

To consult the archives or to make an enquiry, contact our mission Information et Patrimoine at: h.ampere@ugpban.com

To consult the archives or to make an enquiry, contact our mission Information et Patrimoine at:
E-mail: h.ampere@ugpban.com

Any cookies that may not be particularly necessary for the website to function and is used specifically to collect user personal data via analytics, ads, other embedded contents are termed as non-necessary cookies. It is mandatory to procure user consent prior to running these cookies on your website.